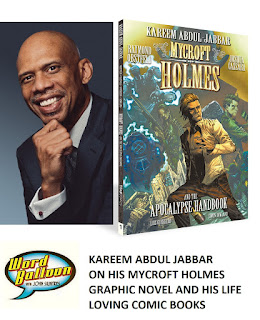 
Kareem Abdul-Jabbar joins us to talk about his new graphic novel from Titan Mycroft Holmes and The Apocalypse Handbook. He's a longtime Sherlock Holmes fan and we talk about his take on the elder Holmes backstory, something Arthur Conan Doyle barely hinted at in few of Sherlock's adventures. Kareem has created an exciting steampunk backdrop and envisions the young Mycroft as a dashing hero rubbing shoulders with many famous people of the 19th century. This is a great read for Holmes and steampunk fans.

We also go full blast into Kareem's life long love of comcs from buying them at his local candy store as a child, to his adult appreciation of the books today. You'll hear about encounters with comic book luminaries, adventures at san diego comic cons, and much more.