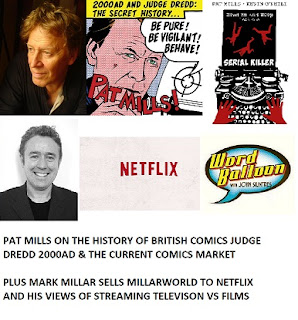 Great Conversation with legendary writer Pat Mills, who's done just about everything in British comics, from creating the 2000AD Megazine to co-developing Judge Dredd with John Wagner., and co creating Marshal Law, The ABC Warriors, Charley's War, and dozens of other series in virtually every genre.

Pat discusses his 2 new books Be Pure Be Vigilant Behave-2000AD and Judge Dredd The Secret History, which documents his career triumphs and frustrations as he created and guided the evolution of British Comics. His other book is a fictional funny crime novel set in the brit comics world of the 1970's Read'Em & Weep Vol 1: Serial Killer co created with his Marshal Law partner Kevin O'Neil . Pat talks frankly about his excitement in getting into the prose publishing business, the British American and French comic markets, why he's  never wanted to write American superheroes, and his thoughts on the past and future film and TV adaptations of Judge Dredd

Then a look at the new deals Robert Kirkman & Mark Millar have made with streaming networks Amazon Prime & Netflix, including a flashback listen to my 2015 talk with Mark about his feelings then about streaming television versus films . Congrats to both creators for pushing comics and television forward with these exciting new deals.