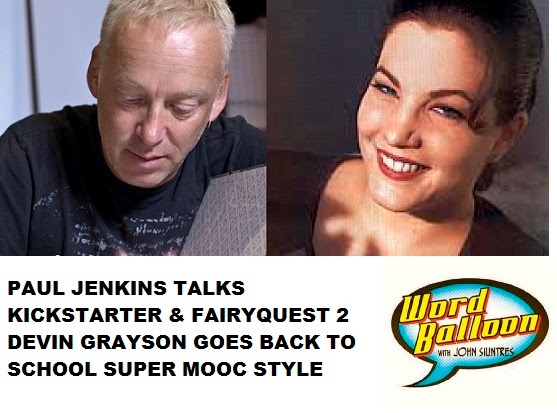 
On this episode of Word Balloon, John expected a conversation with writer Paul Jenkins about his next volume of the FairyQuest saga with art by Humbert Ramos, but Paul had more on his mind. Kickstarter has put him on an emotional rollercoaster with alternating highs and lows. He explains some uncommon pitfalls no outsider would ever think of having to consider. Given Jimmy Palmiotti's Kickstarter POV from last week's episode, this interview continues the conversation in an interesting way. We talk about the help Paul is getting from Boom! Studios, plans to expand the FairyQuest story and universe
Then Devin Grayson joins John for the first time to talk about her involvement in Christy Blanch's new Super MOOC about social issues explored through comic books. The Massive Open Online Course at canvas.net starts this week, and Devin will once again be part of the course's message board community and act as Christy's TA . She's also writing a monthly column exploring some of the issues fans are bringing up in conventions and online. We talk about her work in comics, novels, and gaming and some of the controversies she's faced in her writing career.