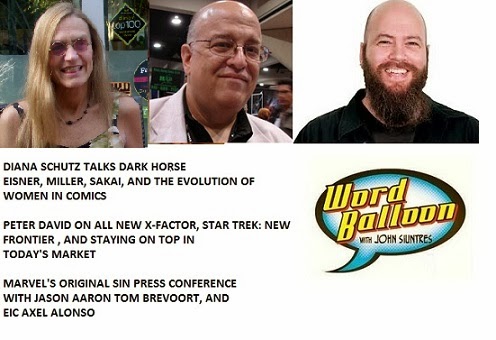 On this episode of Word Balloon, we welcmoe back Dark Horse Comics Executive Editor Diana Schutz. We talk about her 30 year career in comics startinbg as a retailer in Vancouver BC to her move to the states, stints at Marvel and Comico before joing Mike Richardson and making the move to the Portland area in the early 90's.

She talks about her work Editing Frank Miller Will Eisner, Milo Manera and Stan Sakai including The Sakai Project to benefit Stan and his Wife

We talk about the geek girl movement, and the advancement of womes in comics. Plus Diana discusses the evolution of comics gaining respect in the academic world. We talk about her teaching career and where comics are going in the classrooms.

Peter David joins us to talk about his March 8th writing seminar for Comics Experience on Character Development. Plus we discuss his runs on X-Factor, The Star Trek Pocket Books, and the challenges of staying popular in today's comic market.

We'll wrap up with last week's Marvel Press conference for the Spring/Summer event Original Sin . Jason Aaron, Tom Brevoort, and Axel Alonso face the comic press's questions and we lear about the events origins and the directions it will go .