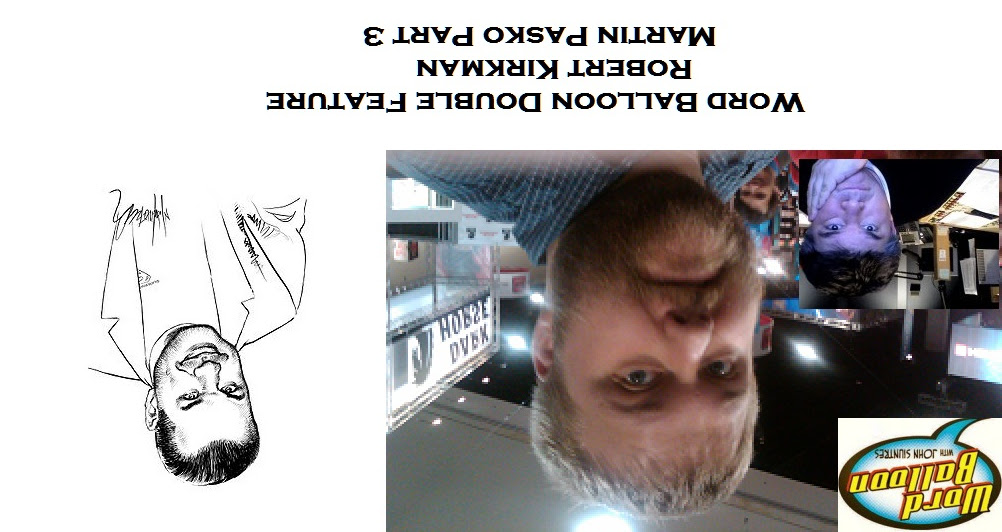 Download The MP3 Here
On this episode of Word Balloon we check in
with writer Robert Kirkman . You'll hear about
the genesis of his new series with Rob Liefeld
The Infinite from Image, plus an update on the
status of their coloboration on KILLRAVEN for
Marvel comics.
We also go in depth on The Walking Dead ,
discussing the differences in working on the
TV show, and writing the comic.
Robert takes us into the writing room, and
production process with some details
on season 2.
Note-This was recorded before the
departure of Frank Darabont as the day
to day show runner producer
on The Walking Dead.
Then we wrap up or talk with Marty Pasko,
which continues to explore little known facts
about DC Comics in publishing television and film.
Pasko tries to figure out  the answers to
the questions of why is The DC reboot
happening, why are theRetroactive books
happening now? We also talk about Marty's
TV and animation work on shows like
GI JOE, and The Twilight Zone .
Note- That amazing Pasko Portrait was
created by Michael Netzer
Posted by john siuntres at 8/13/2011 01:47:00 AM

John, great show again. You are getting me through so many chores in and around the house, it's amazing. Thank you!

But I have to add that if you don't read Xombi because you dislike zombies then you are really doing yourself a disservice. Xombi has nothing to do with zombies, zombies don't appear in it, hell it's not even a horror book! Go check it out man, it's an off beat, well written and beautifully drawn super hero series. In my opinion it's one of the best new books of 2011 and definately the best new book out of DC! Check out this one minute preview/review: http://reviewtopia.net/comics/shea/a-comic-minute/1930-a-comic-minute-xombie-1

I'm looking forward to the rest of the con interviews!