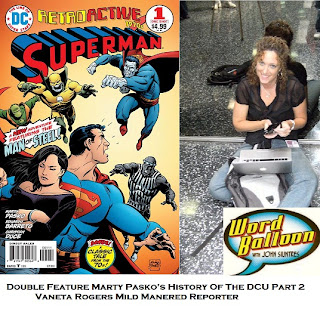 Download The MP3 Here
As the saying goes you don't know where you're going if you don't know where you've been. We explore the past and future changes at DC Comics. Pasko wrote the history for the 2007 DC Vault, and researched more material for last year's 75th anniversary Tashen book. You'll hear about Marty's 1970's DC retroactive Superman story, but also learn about deacdes of chnages and innovations to many of DC's top stars. From the stress filled stomach aches suffered by Wonder Woman editors when they got salacious stories from her creator William Moulton Martsers. Pasko and Cary Bates were given the task of coaching Mario Puzzo in Superman lore while Puzzo prepared to write the 1978 first screenplay draft for the Richard Donner film. You'll learn how editor Julie Schwartz revamped Batman in 1966, to catch the eye of television producer William Dozier and led to him craeting the ABC Batman TV show.
Then Vaneta Rogers Of Newsarama is back to talk about the coming changes in the DCNU. Rogers has interviewed nearly all of the craetors involved in the relaunch,and between us we try to put the pieces together to figure out what may be in store for readers this September.
Posted by john siuntres at 8/04/2011 02:54:00 PM

Dear John,
I have been listening to a half dozen podcasts the last couple of months for comic books, and I just wanted to let you know your's has been amongst the most professional sounding and conducted of all of them. You have a great voice and manner about you in dealing with VERY diverse personalities.

Two suggestions. We in fandom and those within the industry itself have GOT to know how important it is to get the young readers hooked, as the readership is dwindling away and NOT renewing. We know it, we talk about it, and then a decent amount of the podcasts FOR comic books use strong language in the same shows they lament not having younger readers.

It makes it seem like a false pretense, "Oh, if only the *publishers* would do something to bring in the young readers. And in other news, !$@# me, no female writers on Super-Girl?!"

Secondly, I understand the semi-power to influence "policy" for an issue you feel strongly about has GOT to be one of the best things about having a podcast, blog, etc. I get bringing up the topics of the times to each individual you speak with.

But as a regular listener, I swear to gawd if I have to hear the "I hope new comics are one and dones" and "Marvel is in Barnes & Noble" shtick one more time, I'm gonna explode!

Otherwise, thanks so much for your quality podcasts! :-)

Already tried to leave this comment, maybe this time it'll go through.

Really enjoy the Word Balloon podcast, they're very professionally done. John, you've got a great radio voice and your ability to juke and jive with such varied personalities is rather impressive.

I've greatly enjoyed your conversations with Marty Pasko, they really help add to a tapestry of history which could in theory be a great help to the shapers of the future for American Superhero Comics.

I do have a suggestion. We all complain that we need new readers to repopulate fandom, and we complain that there's not enough introductory books (ie. simply kid-friendly, not necessarily comic-books for babies). I hear it ALL THE TIME on the half a dozen or so podcasts I listen to. And then EVERY ONE of them, Word Balloon included, use strong language, as if everyone has at the same time accepted that kids aren't listening or reading.

Also, I would imagine one of the coolest things about having a successful podcast, blog, etc., is the influence one can have on the industry they are covering. I'm all for some fan directed impact on the decisions made by the higher ups in the comic industry, and applaud your use of the soapbox you've made for yourself here.

But as a regular listener, it does get a bit tedious hearing the EXACT same complaint/request being made of every professional/guest you interview. Digital comics should be one and dones, according to the humble host, and for the most part, I agree. Or, like a previous guest had mentioned, perhaps completely restructured stories that hit a cliffhanger at 11-12 pages and come out every two weeks rather than once a month.

But it gets VERY tiring as a listener to hear the EXACT same description and complaint. Let's either put it to bed or ask the question in a different way. Put some advance thought into the question, especially if you KNOW you're going to ask it EVERY interview. Please.

Thanks for the great podcast, and keep up the good work!

Heh, have to agree with thegalaxy on the repetitive questions issue...

Although, I have to admit, I'm starting to enjoy how every time you pop the question about your concerns that digital readers aren't prepared for a 30 day wait between chapters, your guests disagree...

Folks, I'm asking the same questions about my own concerns for the shift to digital for a specific reason. I want to hear what more than one creator thinks of it. You only get to the bottom of an answer when you ask more than one person.

I have no problem with the fact that nearly all the creators disagree with my POV. There is no "correct" answer to this question.

Sorry if that gets redundant for you to hear, but these questions are being asked for reasons and WB projects beyond the podcast.

John said: "Anyway it's maybe a 3-5 minute subject in a 1hr-90 minute interview"

You're right about that, and I have been loving the extra long ones. Keep it up! And this is your show, do with it as you please!