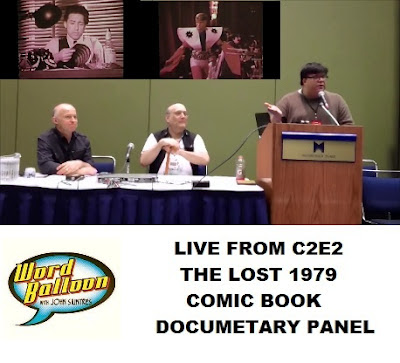 Live From last weekend's C2E2 Word Balloon presents the first panel exploring the 1979 Lost Comic Book Documentary. You'll hear audio from the documentary which gives a great behind the scenes look at the offices of DC and Marvel. Guests on the panel were Mike Gold former editor and DC Comics public relations man when the documentary was made, and artist Douglas Klauba (The Phantom, Project Superpowers) who discovered the film.

Then podcasters Jim Seguland (Raging Bulletts) and Brian "Pants" Christman (Comic Geek Speak) join us for a quick update on their shows.

A really interesting episode, cheers John. I don't, though, get what the big 'mystery' is surrounding the documentary. It was a short film from Canada made for kids, what else needs to be known? OK, there is the question as to the exact date, but I don't get why that's so interesting. It's a fun, little-seen curiosity, isn't that enough?

Well Martin, You didn't SEE the docu, and there are many faces not Identified in the film that are comic book creators that older readers or collectors have seen their names for years but never saw them in action. I'm still trying to ID those folk. How many Julie Schwartz or Denny O'Neil film appearences have you seen?

As for it being a fun "little seen curiosity" ypu're right, maybe that's why it was interesting film to the full capacity room who watched at C2e2. Unlike today there weren't that many films or media made to promote the older eras of comic books, and some people find these "time capsules" interesting.

You know how Marvel or DC might hype the title of an issue of the comic saying WHEN TITANS CLASH...?That's what I'm doing by calling this film. THE LOST DOCU.

Now, you need to bring the film to the UK - there's a convention here in Scotland soon ... go on, I'll buy you a deep-friend Mars Bar!