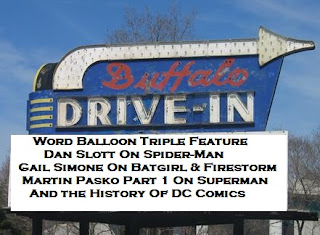 Here's a  giant sized Word Balloon to have something to listen to, while you're traveling to the San Diego Comic-Con, taking a long plane/train/car trip, or spending the day running errands for hours. Nearly 4 hours of fantastic comic talk in one podcast!
First up, Dan Slott gives us the low down on Spider Island, the coming event in Amazing Spider-Man, Venom, and several other Marvel comics in the next 3 months. It all starts with next week's ASM #666.
Then, Gail Simone joined Art Baltazar and Franco!  on the Aw Yeah Podcast, and dropped some behind the scene clues about her books Batgirl and Firestorm. Both are part of the DCNU 52 title initiative happening in September. She talks about the transition Barbara Gordon will make from Oracle to her return to the bat tights. Gail also tells us how her Firestorm Co-Writer Ethan Van Sciver got her excited about writing the further adventures of Ronnie Raymond and Jason Rusch .
Finally Marty Pasko returns to talk about his new Superman Retroactive 1970's book. We start to compare the coming Man Of Steel reboot to the Bronze age re-boot, when Clark Kent went from Daily Planet Reporter, to WGBS Newscaster, and a worldwide chain reaction caused all of the kryptonite to change to iron.
Plus, being the DC historian who helped create the DC VAULT and Taschem's DC 75th Anniversary books, Mary can't help but digress into great anecdotes about many writers artists and editors. You'll hear stories about every decade of the companies rich history.
Because we're giving you so much to enjoy on this episode, here's a time code for all the guests and information.
Open, including John's SDCC Schedule 00:00-2:49
Dan Slott 2:49-1:38:50
Gail Simone 138:50-2:23:47
Marty Pasko 2:23:47-3:50:08

Great show John,
A great cast of guests. I especially liked the talk with mr. Pasko, very informative indeed! The stories about Bob Kane cracked me up, it's not often we get such a candid peek behind the curtains.

I'm excited to have learned this was but the first part of many!

Keep up the great work!