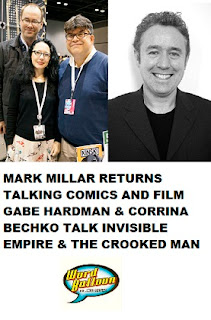 Great catching up with Mark Millar who talks comics and film. We talk Chrononauts Jupiter's Circle and Jupiter's Legacy, Kingsmen:The Secret Service, Mark's collaborations with Director Mathew Vaughn, his film consulting work at 21st Century Fox.We compare the Fox filmmakers to the Marvel filmmakers and get his thoughts on the coming Fantastic Four film, and director Josh Trank.

Then, Gabe Hardman & Corrina Bechko return to talk about their Image Series Invisible Republic and the Upcoming Shadowline Treasury Edition sized graphic novel, The Crooked Man.
Like our talk last month with Hilary Barta Gabe and Corrina and I do a mini scene missing , talking about recent films we've seen.

I always wonder, when I hear mainstream writer/artists like Gabe Hardman criticize non-mainstream artists (here: Jodorowsky, who is an artist in the true sense of the word, if you like his work or not), as it seems to me, that they are not really entitled to it. Granted, Jodorowsky’s movies are an acquired taste, but if you do not know the importance of the man for European comics (and not just for his collaborations with Moebius, but also François Boucq, Milo Manara, Juan Giminez, an on and on…), then you come off as pretty ignorant.