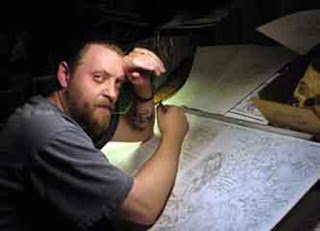 On this episode of Word Balloon we begin a 2 part talk with artist Tony Harris. Tony and Brian K Vaughn have just wrapped up their Wildstorm comic Ex-Machina. We talk about what it’s like to live with drawing the same book month after month for a long period of time. Tony also takes us through his comic career, from co-founding Gajin Studios, to hooking up with James Robinson to do 40 issues of Starman . Tony fondly reflects on working with Starman editor Archie Goodwin, and how Goodwin’s adaptation of Star Wars The Empire Strikes Back with artist Al Williamson was responsible Tony’s first attempt at drawing comics. We discuss Ex-Machina, from Tony’s first discussions with Vaughn, and the early designs for The Great Machine’s costume, to the very last issue. Tony talks about the careful attention detail he put into designing the art, to make their fictional New York feel right for the NYC locals. He also discusses the life-like process of casting his friends at a local Christmas party , to pose for modeling as the characters in Ex-Machina . Tony would hand the Robinson script to his models and they would “act” out the poses like a stage play. Next week in part 2, we discuss Tony’s attempts at getting a comics creators guild organized, and what’s in his future , now that Ex-Machina has wrapped up? Note: This interview took place before the DC entertainment announcement of Wildstorm’s demise as an imprint. Attempts at a direct comment from Harris are still in process.
Posted by john siuntres at 9/23/2010 04:56:00 PM